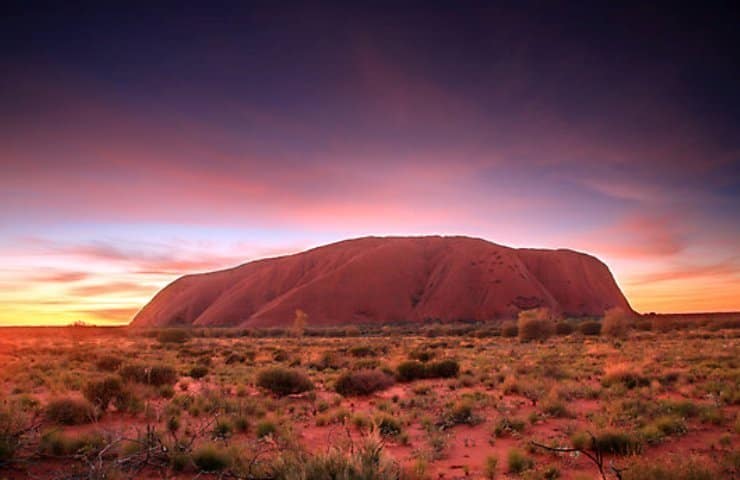 I wanted to share with you something amazing that happened. When I trained to become a shamanic practitioner, it was done in the Native American way. However, when it came to discovering who your guide would be and how to access them to assist with Soul Retrievals, I was shocked to discover that my guide was an Aboriginal elder.

He showed me how to enter Uluru where I was met by little people who were also Aboriginal. They would clear my energy field so that I could then enter Dream time to find the lost soul pieces of the person I was doing the retrieval for. I have come to love this ritual as often the children come running shouting “Mina! Mina! You are here!” wrapping around my legs. I am often given tidbits of wisdom and guidance during this time as well.

The land I would enter inside the rock is one of red rocks, red earth, and almost desert-like. The beings inside the rock live in a community and I knew that they are part of the shamanic lower world, a part of that helps keep the world running and stable, part of the elemental kingdom.

On January 12th we had a rare Saturn-Pluto Conjunction. Here is information from the site Cosmic Consciousness. https://www.cosmicconsciousness.com.au/post/why-is-12-january-2020-so-important

The Cosmic Umbilical Cord
This particular outer-planet conjunction is the most magical and eagerly anticipated union out of all the various outer planet unions. It is believed that a significant shift will take place – perfection will spread throughout the world – a cosmic umbilical cord will unite heaven with earth. To us this seemed like a true cosmic consciousness. At the time, there was very little literature available on the web about it, but it deeply resonated with us.

Not only was this date astrologically significant, the Anangu spoke of a great ritual at Uluru which was disrupted, and never completed, at the end of original Creation Time. It was said that this day in 2020 is an ideal time to complete the ritual.

This is a powerful activation that will see energy sent up and down the cosmic umbilicus, and through the planet’s leylines, connecting all of the Earth Chakras together. There are two interconnected major energetic leylines, the Rainbow Serpent (feminine) and the Plumed Serpent (masculine). Of course, the well known indigenous stories tell of two serpents; a female snake Kuniya and her nephew Liru, who meet at Uluru. On a flat earth map, these two serpents form an infinity symbol. This connection will create heaven on earth, the golden age or a return to Eden – however you like to phrase it.

On January 13th when I connected in with Uluru during a Soul retrieval for a client, I was surprised that there looked to be a purple energetic fence around the sacred space. It was like an electrified violet flame. Thankfully, I slipped through the fence easily and entered the rock. What I saw inside shocked me.

I saw a forest with big trees, abundent life. It was so different I thought I was in the wrong space! When from behind a tree come some of the beloved people I have come to know. They rush me saying “Isn’t it wonderful Mina! It is DONE!” I said yes but told them I was confused. They explained that no more would there be a disconnect within people of the earth towards their earth mother. They explained that just as the earth’s chakras were disconnected, so too were humans from the earth.

Before this time people were disconnected from the earth except for the rare ones that forged the connection with honor and integrity. People will begin to see that there is no separation between themselves and the earth. Where she is polluted, so too is our own form, energetically and physically. Where we mistreat her, we mistreat ourselves. Where we heal her, we heal ourselves.

They explained that the elemental kingdom is thrilled as they have waited for this for so long. There was much damage done when humans were disconnected from the earth. They are not naïve to think that change will happen overnight, but they know that change is indeed here. It is beyond exciting and I could feel the realms celebrating.

To add to that incredible joy, in a vision last night I was shown the sheer number of souls coming into earth completely awake. They showed it as bright lights landing all over the earth. These souls will not/have not come in through the veil, they will know exactly who they are. They are awake to their true nature, not necessarily to the ins and outs of the mess on this planet. Herein lies the challenge.

I was asked to share the importance of not imposing our limitations, beliefs, our reality on these children of light. What we believe reality to be, is not what they know in their hearts that it can be.

These children will be very energetically and physically sensitive. They are master teachers, coming in to show us a different way of being and to help us understand and step into our own creator abilities.

I shared this vision with a client and was delighted that they had a dream that was very similar. She saw all the beautiful lights that are going to be born into our world! How amazing is that confirmation!!

It is a really exciting time and great change is here! Now we clean up all that is not in alignment, all that was created during the time of disconnect.

Sending you all much love!

You can purchase the incredible picture of Uluru used in the blog at https://www.redbubble.com/people/chockstone/works/337912-ayers-rock-uluru-sunrise-nt-australia

NOTICE: We are experiencing shipping issues on international orders. Orders are limited to US & CA temporarily. Dismiss