Activating the Hidden Pyramids – It is Done!

My trip to Mexico, specifically the island of Cozumel was simply amazing. As soon as we arrived, I felt a shifting, an opening and it was like I exhaled a breath I didn’t even realize I was holding.

I could feel the land spirits, the guardians, the protectors, and the god and goddesses of the Mayan people. Our first night in the condo was full of these beings waiting to connect. It was like a welcoming party. My daughter could sense something and she kept hearing footsteps, so I had to put up a border around her room so she wouldn’t be disturbed. She is tapping into her own abilities more and more but this would have been a bit much. 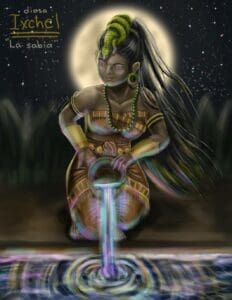 It was on that first night that I met Ixchel, a Mayan Goddess of the Moon, water, weaving, medicine, and childbirth. She is the Mother of all of the Mayan deities and rules over the cycles of life and death. She showed me herself in all of her stages, the maiden, the mother, the crone. There was also a major male deity that reminded me of Zeus, yet it was a Mayan sky god named Itzamna, which I later learned is Ixchel’s husband. He stood in the background looking fierce.
There were Indios warriors, leaders, and wise women present. They were holding a beautiful space for me and all of us that were working. These beings and their energy connected through every ancient civilization. They just have different faces and names, but at the end of the day, the energy is consistent. There is so much that unites us and it’s the human that seeks to divide.

For the next three nights, I worked with these beings. They showed me Crystal’s deep in the land that will be activated in the coming days, just as the pyramids all over the world would be as well. They showed me how vortexes were in the land and sea but that they were negatively polarized. They drained the energy from the land and her people. It was really interesting to understand that those with a deep connection to Lemuria are often drawn to the sea, and the negative vortexes were draining them.

These souls are drawn to the islands, to the water. Yet they often find themselves struggling with their energy and prosperity. There is a darker element that has taken hold in many of these regions. It fed on the open-heartedness and light that those seeking the feeling of Lemuria held within.

In the nights while I was working I could feel so many others on the earth plane working with me. Those of us called to do this work are connected at the deepest levels, supporting one another. None are meant to do this alone.

We worked with the vortexes that were pulling energy from the people and land. Changing their polarity. So many have been sucked dry as they begin to open to their own magnificence and truth. We worked to change the polarity and remove the taint.

I believe these negative vortexes are all over the Earth each hitting different groupings. All with the same purpose of siphoning energy, particularly as people begin to open to who they are, but not enough to understand and create strong energetic boundaries.

As far as activating the hidden pyramids (Hidden Pyramids Are Awakening – Jenny Schiltz),  I knew that I needed to get out onto the water via a boat. They showed the importance of actually getting in the water and feeling it. I started looking up catamaran snorkeling tours and found one that felt right. Yet each time I tried to book, the date I wanted would be available one moment and gone the next.

The only date that stayed viable was the day I had friends visiting from Playa del Carmen. A wonderful couple expecting their first child. We had worked with them before in Puebla Mexico clearing the pyramids. This is a link to that write up (Return Of The Children Of The Sun – Jenny Schiltz)

I asked them if they were open to a snorkeling catamaran tour and thankfully they were. Initially, when It was shared with me the importance of the trip and activating the hidden pyramids it was clear that it was to be my husband, myself, and our daughter. Representing the Divine Father, Divine Mother, and the Divine child. I realized that with our friends in attendance it would be another trinity. It all lined up so perfectly.

The night before this trip I got hit with massive intestinal issues. I didn’t know if it was purging or if I had gotten ahold of something. I asked for assistance and I told the universe that no matter what I was going on that boat the next day.

The day of the catamaran trip was July 9th, perfectly aligned with the new moon even though my human did not plan it that way. I felt so much anticipation but also confusion. I had basic instructions but none that satisfied my humanness. The conversations within were quite comical. One part was so worried that I would fail and then my highest aspect would say “It’s not possible to fail, it’s not what you have to do, but what you hold within that is the signal.”

Once my friends arrived I gave them each a quartz crystal and asked them to imbue it with their energy and with a call to awaken to the purity of our existence, to our truth. These crystals were to be thrown into the water wherever it felt right. To give it no thought, no logic and to do it based solely on feeling. In total, we put six crystals into the water off of Cozumel.

When we made it to the deep water area where we would be snorkeling, I again was filled with such doubt. The water was rough and choppy. Everyone piling off the catamaran had a frantic forced feel to it. I wondered if I had gotten things wrong. Spirit kept whispering to trust.

Below me in the water, were large rocks covered in sea life. I began to relax my breathing and opened myself to feel. What hit me was sadness, such deep, deep sadness. I started to choke up which is not a good idea with goggles and a snorkel tube.

I then heard whispering from the ocean herself,  telling me not to dive into the sadness, but to open my heart to what was before the sadness. I did and I was flooded with joy and a feeling of home. I watched as those rocks became temples and pyramids. In the areas of bare sand in between the structures people walked. It was like I got the treat of glimpsing back in time. To not only the time of the Mayans but the time of the Lemurians.

I got lost in it, it was like watching a movie. I saw one of the original pyramids, and energy coming down from Sirius, activating it. I saw the high priestess there helping to translate the energies for others.

It felt like minutes when in fact the 45-minute snorkeling in the waters was complete. My husband got my attention to tell me that we needed to get back in the boat and I was shocked at how fast the time went.

I asked Gaby, my friend, what she felt and she said that she too felt an incredible sadness, but the coral told her to get out of her head and into her heart. When she did she felt great joy and the overwhelming feeling that all will be ok even though we are in a time of great earth changes. The energy caused her to feel nauseous and dizzy, so she returned to the boat early. The energy was so intense, I can only imagine it is magnified in an expecting mother.

The catamaran took us to the next destination to have a meal. The skies changed, large gray storm clouds loomed. The energy in the air was electric. I could feel the presence of Zeus/Itzamna. The sky opened up for a clearing shower. Once the rain stopped, it felt complete.

The next morning, July 10th, I woke with the words being repeated in my mind “IT IS DONE”. Initially, I felt that it meant the activation of the hidden pyramids, but the more I sat with the energy I realized that all of humanity had made a huge shift. We all had risen vibrationally.

The island felt different and the water a little cooler. Everything had shifted. I kept getting the feeling that big changes are upon us.

We returned home on the 12th, it was difficult to say goodbye to the land, to the sea, and the people. Somehow with all this energy work that was done, I unlocked a piece of myself. It is really indescribable.

The energy hangover and the intestinal issues nailed me as soon as we landed. It had for the most part been kept at a bearable level while on the island. Once I returned home I started a full-on energetic and intestinal purge.

Last night I dreamed of Ixchel. She had this pitcher filled with beautiful water from the Caribbean. She poured it over my intestines, soothing the pain and fire within. Grateful for the healing. The shift within feels quite massive. I’m still in a state of awe.
Thank you to all that support and share this work. It really means the world. I hope that you are feeling the massive shift and surfing the waves.  If you would like to join the 2x weekly Aura Cleansing, healing, and energizing to help you navigate the intense energies click HERE
Jenny
Image credit: https://www.deviantart.com/trinity-at-night/art/Mayan-Moon-Goddess-Ixchel-The-Wise-852372277